In recent years he has relocated to eastern Tennessee and returned to his musical roots, populating his songs with people, places and sacred stories; paying tribute to the past with the descriptive flair of a seasoned screenwriter, offering up vivid vignettes that feel lived in and relatable.

A flavorful mix of classic country and the finest Americana! 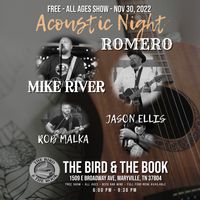 Free All Ages show at The Bird and The Book in Maryville, TN on Nov 30th! This is an early show 6-9:30 so come have dinner, bring the family and break up your work week with us! Full service bar for those over 21, and full dinner service available! Artists featured will be: Mike River www.mikeriver.com Romero https://music.apple.com/us/artist/romero/1269330262 Rob Malka https://robmalka.com/home Jason Ellis https://www.facebook.com/JEllisAcoustic